Walking the Labyrinth 1: My Cup Runneth Over

Some summary thoughts after meeting the ‘New Venice Haggadah Group’ and navigating the city using an unusual objective: investigating which palimpsests of officially sanctioned posters would easily and quickly part from their metal housings when soaked by inclement weather. Like an excited boy, thieving on ‘mischievous night’, I tore those soggy posters down on the night of acqua alta, in the year of our lord 13/10/2015.

At the zenith of acqua alta there is stillness: where the tide like all tides, languishes and vacillates between push and pull. Imagine filling a glass to the absolute brim, the meniscus visible by lowering the eye. Add a few drops more, and the cup runneth over. At night this watery tension is nothing short of magical.

The water and the republic are united: one interdependent organism. A prominent 16th Century notice in the Doge’s Palace intimates that polluting the waters is to become an enemy of the state itself. Every year the elected leader married the water by casting a wedding ring into the lagoon.

Italo Calvino talks about another kind of state in ‘Invisible Cities’: a dreamlike torpor caused by constant exposure to reflection and movement. It’s no coincidence that Dickens’s chapter on Venice is entitled ‘An Italian Dream’.

Venice is both a real place and an imaginary place at the same time. It has long sold a vision of its uniqueness to the world and however crass this appears, it is difficult to shake. And yet this city is super-real: you touch the fabric of it far more than others: there is no car window to gaze at it from. You pound the stones or sway, cradled on the water. You cannot experience the city as a series of mysteriously disconnected circles of experience: there are no metropolitan burrows to pop your head out from. You are obliged to see Venice in its entirety, as a series of linear landmarks along ritual routes.

Everything about it has been said, but how you experience and move through the city can make it unique and different every time. Paying attention to the process of moving in itself gives focus and perspective. In the chapter “Walking the City” De Certau says:

The story begins on ground level, with footsteps. They are myriad, but do not compose a series. They cannot be counted because each unit has a qualitative character: a style of tactile apprehension and kinesthetic appropriation. Their swarming mass is an innumerable collection of singularities. Their intertwined paths give shape to spaces. They weave places together. (1) 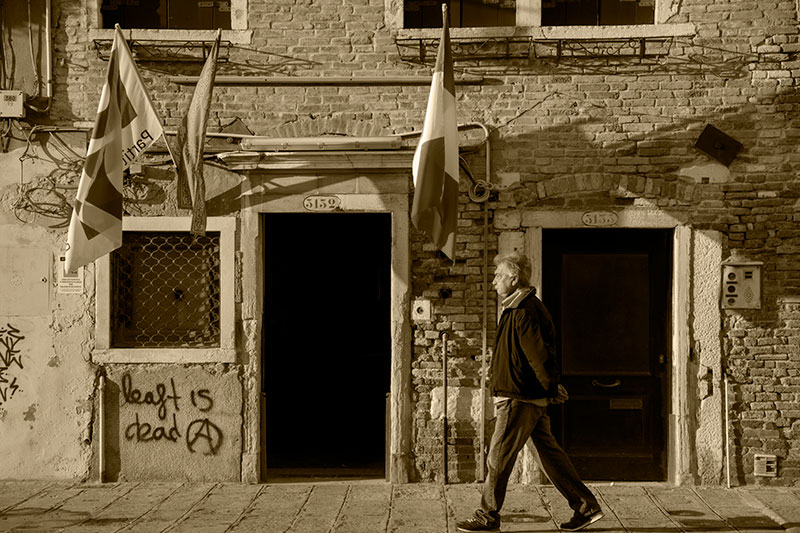 Barbara Del Mercato introduced the Haggadah Group to a game today. Say the name aloud of cities you’ve experienced, and that conjure strong associations in your mind. Then say the names aloud of places that left no impression. What’s the difference? Why do they do that?

For me, it’s about layers: the richness of the texture, the depth of archaeological possibility, interpretation, historical theories, migrations of ideas. The denser the weave, the more complex the relationships, the better it is. I nominate Cairo, Delhi, London, Venice; and provincial capitals like Jaiselmeer, Cochin, Fez, Cordoba, and Lecce.

If listening to artists talking about their work (I’m thinking of Anna McDowell on elegant unresolvable simplicity) enables you to see that the work and the artist’s personality are irrefutably one, then these city preferences are mirrors of myself. Josh Baum asked if I thought the city was in the process of trying to communicate with me. I prefer John Dominic Crossman’s thought, that “reality is neither in here in the mind, nor out there in the world…reality is relational and relationship” (2)