Talking to the Dead: Part 3 (The Architecture of Death)

Is the issue (and aesthetic) of the ‘abandoned’ cemetery solely a concern to northern European Protestants? In the UK, many of the great 19th century urban cemeteries were designed and laid out by the same people who created public parks. In Newham, London over 60 per cent of public open space is still made up of cemetery land. Yet, the dominant form of funerary rite in the UK is currently cremation, accounting for 72 percent of all disposals. One reason for this, often cited by the dying, is that of not wanting to leave behind the ‘burden’ of a grave to maintain. No one is going to the cemetery anymore, and the difference between San Michele and UK graveyards, in terms of care, is both profound and deeply cultural.

Alison Killing, a Rotterdam-based British architect, has made a study tackling the ‘architecture of death’ that resulted in a TED talk and an interactive exhibition in Venice (2014). She asserts how “hospitals, funeral chapels, crematoria and cemeteries once used to set an example that would be followed,” and how “these forms [once] would set trends and define values for architecture more widely. Today, this once strong position seems to have faded away completely, despite the fact that the need for design related to death and dying is greater than ever before.” I begin to think of the Pyramids, Taj Mahal, Hagia Sofia, Newgrange, and Ypres: she certainly has a point.

One of the sections in the cemetery at San Michele is set apart for wealthier Venetians. Looking at the difference between these tombs and humbler ones, it seems as if wealth can buy you two things: eternity (on earth not in heaven) and the security of a continued familial bond. A mass of weighty marble and granite ensures that no one can interfere with your body: and barring earthquakes and other disasters, you will lay slowly decomposing much longer than your plebeian neighbours. Huge multiple family ossuaries give you a fighting chance of spending eternity with your nearest and dearest: a thought that might strike terror in the hearts of some people I know. 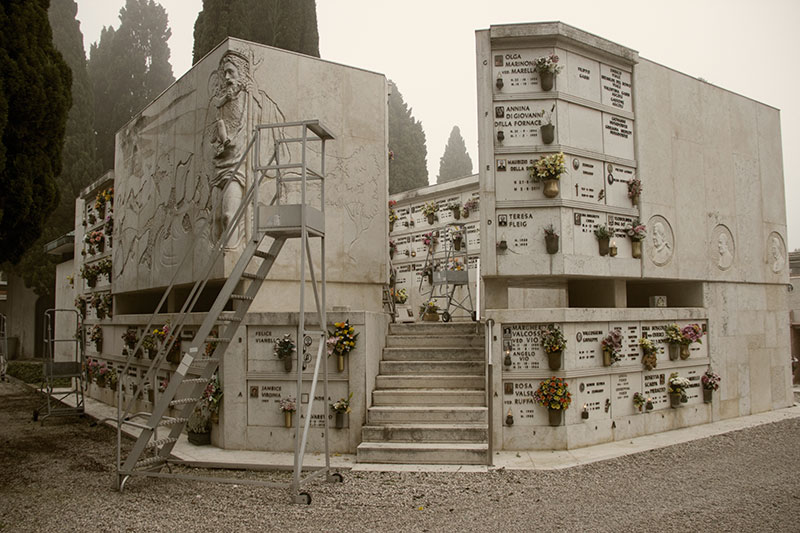 In Europe cemetery commissions are still sought and undertaken by many great architects – Asplund, Lewerentz, Rossi, Scarpa, Miralles and David Chipperfield. However, in the UK there has been no real equivalent interest the architecture of death among big name architects since Lutyens (1).

Following an international competition, David Chipperfield Architects were selected to design a new section of Venice’s principal cemetery (Recinto XXIII).  Rather than distributing the new elements in a linear manner (which through their regularity creates something of a rigid, repeating pattern of walls and tombs) an organisational structure has been developed which groups the volumes together to form a greater sense of settlement and enclosure. Informed by the principles of the views, courtyards, alleys and gardens of Venice, this spatial organisation hopes to create a more varying and yet clearly defined San Michele landscape (2).

I wonder if the father and son that painstakingly passed me on the cold foggy corner of Recinto XXIII were thinking of the relationship of Chipperfield’s design to its surroundings. I suspect they had more pressing affairs: it seemed as if the father, with his right eye already ice-blue and glassy, was comforted in being shown his final resting place by the person who would take of continue to take care of it. 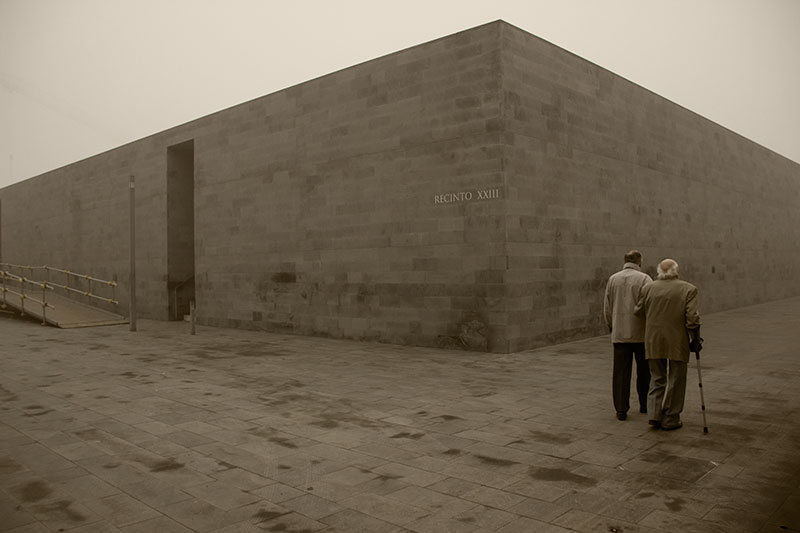