I mistakenly thought that the seven martyrs might be notable figures in the communist movement who had died for the cause. Try researching it yourself. Either it’s a reflection of the current political climate or the ultimate holders of the purse strings manipulating the media, but it’s much easier to research martyrs created by the communist persecution than martyrs for the communist cause. The latter seems to rest principally with Trotsky and Guevara.

An initial trawl reveals that Joseph Stalin and his savage enforcer, the ‘Butcher of Ukraine,’ Lazar Moses Kaganovich, created the forced starvation of ten million post-WW2 Ukrainians. On 27 June 2001, Pope John Paul II beatified twenty-eight of those martyrs: bishops, priests, nuns, and one layman who suffered and died for Christ and His Vicar under the communist scourge. This included the seven feet tall Andrej Sheptytsky, also popularly known as Moses: the ‘Moses’ of Ukraine.

As a contrast, on August 7, 2010 the extended meeting of Central Committee of the Communist Party of India (Marxist) in Vijayawada saluted and dipped its red banner to the 255 martyrs who were killed by the anti-left forces in various parts of West Bengal since the last Lok Sabha elections. They were confident that the ultimate sacrifice of these comrades would not go in vain.

Information is Beautiful asserts that more people (94M) died as a result of communism in the 20th Century than from homicide (58 M) and genocide (30M) put together. The combined death tolls of WWI (37 million) and WWII (66 million) exceed communism’s total by only 9 million. Curiously, all of the world’s worst famines between 1900 and 2000 were in communist countries: China (twice), the Soviet Union, and North Korea.

So what of our ‘7 Martiri’? As usual, fiction based on truth is as strange as truth based on fiction.

They were strung on a rope stretched between two erected poles, their arms outstretched in crucifixion, their backs to the lagoon. The volley of shots aimed at their chests also broke the rope, but a shot to the temple finished those writhing in agony. To remove the clots of blood, teeth, and brain matter from the pavement, the Germans gave brooms and buckets of water to the children of Castello.

Every year, on the anniversary of this event, this Communist Party club ‘7 Martiri’ organizes a commemorative ceremony. At six o’clock on 3 August, ever-dwindling numbers form a procession to the monument outside the Giardini. Next to the plaque where the candles are never lit, is the newspaper stand, which for years I have taken for a piece of outsider art: perhaps a wry comment on the nearby Biennale. Turns out this is a homage to the artist James Lee Bryars, and the seven panels each depict the lives of one of the martyred men. I always vaguely wondered why the eighth panel was blank, without ever properly focusing on that thought… 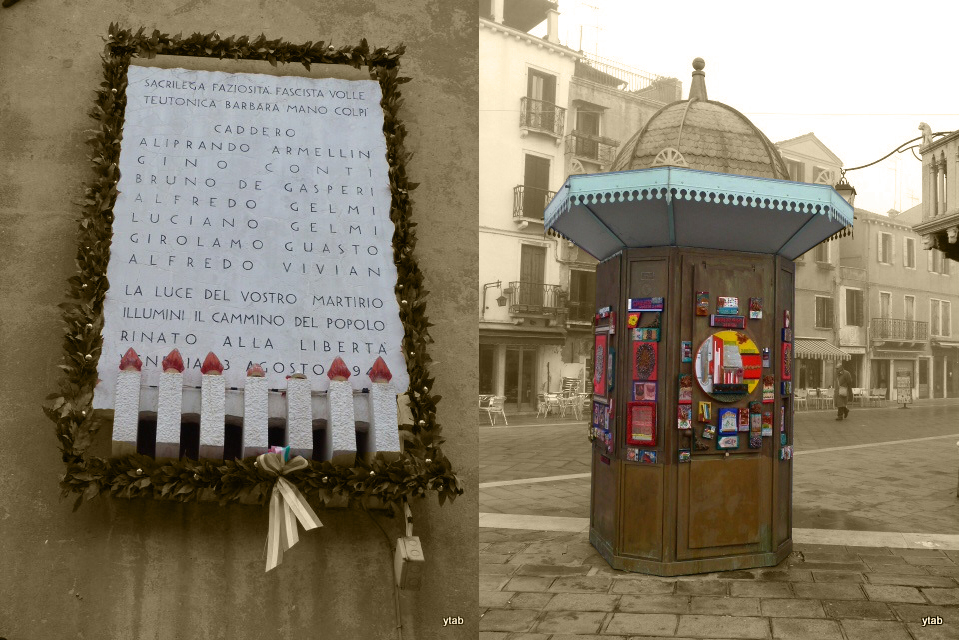