So how does walking through the labyrinthian habitat of less than sixty thousand souls, but in the footsteps of twenty-seven million visitors each year make you feel? Try drifting off-track, completely alone, into residential alleys and neighbourhoods as the sun sets or in the dark of night. It can feel like a city of ghosts: and they are watching you.

This blog-feed is the first of many guest blogs, and is a personal response to walking the city at night by Nathan Gotlib, a freelance artist and designer originally from Belgium, whom I had the good fortune to work with along with the rest of the group from the New Venice Haggadah Project: http://www.nathangotlib.com/

Like clockwork, they would always slam shut at nightfall. I was walking through the squirming narrow streets, desperately getting lost, and the sound startled me. It had been so quiet for the past ten minutes and I had been quite lost in thought. Every time I walk these streets – something I have been doing daily for the past few weeks – I notice another architectural detail or blemish.

I must have been admiring a patterned doorway when I was caught off guard by the loud noise. For all I know there used to be a different door there previously: how could I tell? The only constant in this city is change. The natives, a rare breed from what I gather, must get so used to it. They would be completely desensitised. This slamming of their shutters must be like a secret language: it’s like they all know that as soon as the light dims, as soon as the last illuminating sliver vanishes, the dark green and blue shutters are to be shut tight for the night. Similar to a cockerel welcoming the dawn of day, the shutters simultaneously and loudly usher the day away.

Startled out of my reverie, I notice that the streets are empty. The only other kindred spirits I would stumble upon are also helplessly trying to read these illegible maps. Turning a corner, I bump into what appears to be a local. I start getting an ill-placed feeling of hope.

“Excuse me, could you please tell me where I am?”

“You are at the crossroads my friend, wherever you want to be!”

I can not tell if he is serious, his face as expressionless as a wooden mask. To be honest, I was surprised he spoke the same language as me and that I didn’t have to revert to unintelligible hand gestures. He waddles off giggling to himself. 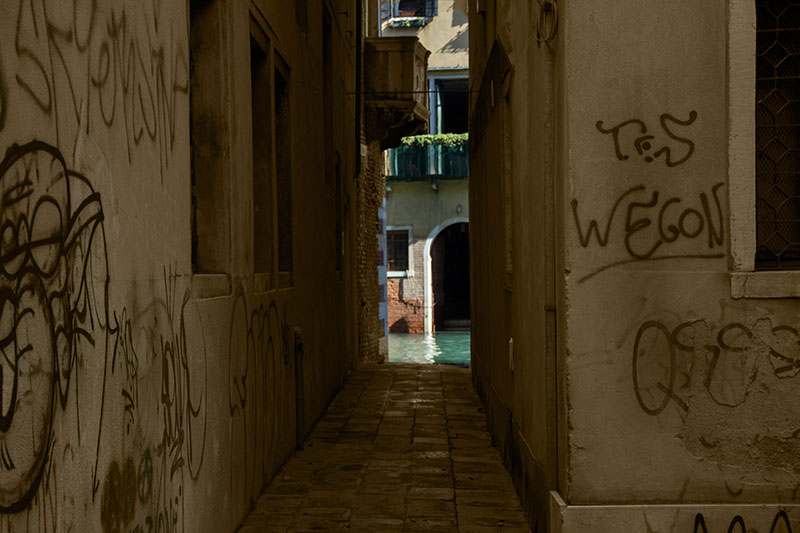 Having lived here for what seems to be an eternity, I wonder why they still treat me like a tourist. It is probably because I still struggle with those useless maps every once in a while… Shrugging it off, I walk until I reach the water. Across the lagoon, the dim-lit buildings – judging and untouchable – seem to waltz to the rhythm of the crashing waves on the eroding rock. I stop at the edge, hypnotised and serene. What snaps me back to reality is the shrill, bellowing cry of a leviathan, completely obstructing my view of the dancing buildings. Afraid that a lingering stare would petrify me with shame, like Lot’s wife looking back at the burning ruins of Sodom and Gomorrah, I quickly turn into the first small alley I come across. After a few strides, I find myself on an almost familiar square. Under the looming skewed tower, all of the windows are diverting their gaze from my inquiring one, hiding behind those dark green and blue shutters. Where am I? I wonder.