On 1 Dec, I set out to walk the perimeter of Venice, keeping my right shoulder as close to the lagoon as possible at all times and without taking any dead ends. In keeping with one of Phil Smith’s mythogeographical strategies, I carried a ‘burden’ – in my case a good camera and a couple of lenses. This slowed my walking time by at least half, but not as much as an arthritic hip, which caused me to abandon the walk at the mid-point after 6 hours. Because of the layout of this extraordinary city, I kept encountering my phantom selves: returning constantly to within visible distance of where I was 30mins ago, or at one point 4 hours ago. 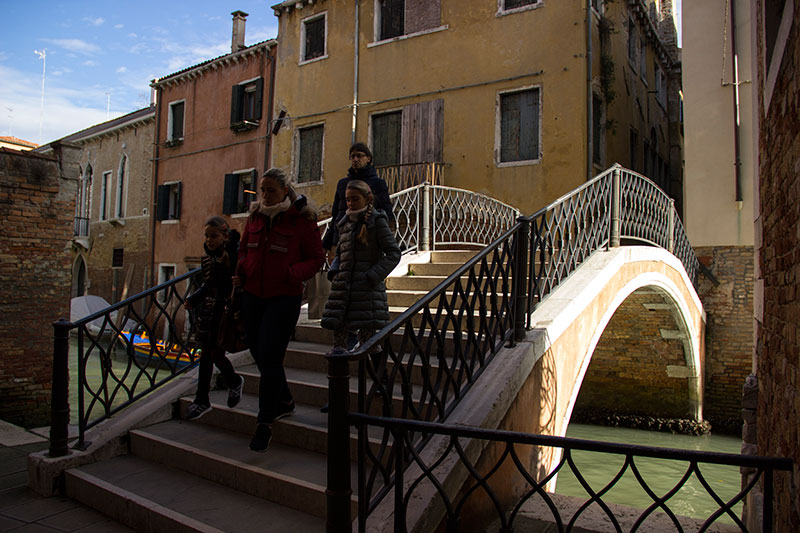 The Metropolitan City of Venice is constructed on a group of 118 small islands separated by canals and linked by bridges. The reinforced banks of the canals follow the original inlets and channels, giving the city it’s organic, unplanned layout. Tidal mud flats make up 80% of the Venice lagoon surrounding the city. Islands are left and covered by the swell of the tide, but there are 31 that are currently inhabited.

I realised on my walk that a significant proportion of the city’s older population now live in enclaves around the points and extremities: in places like S.Elena, S.Giobbe and Sacca Fissola. Whilst they may be far from the (ever-swelling) madding crowd of tourism, these places have failed to create communities: they feel abandoned, there are no shops, no principle streets and no obvious meeting places.

Islands within islands, eh? The city administration has spent a considerable amount of time over the last ten centuries deciding who should live where: re-enforcing this with a series of legislative edicts and penalties. Other boundaries are much subtler. Some are self-imposed, some are due to social conditions or class and some involve religious affiliations. In these times of mass migration, the arguments around whether to manage communities, or to provide support for communities managing themselves, are still very much alive.

Boundaries were often the result of genuine concern with public health and the spread of disease. The poor were susceptible to disease and this created subtle confines; the introduction of charity through the parish churches in the 1600’s bound the poor ever more tightly to their place. There were seventy-two parish churches, thirty monasteries and thirty-two convents by the end of the seventeenth century, so each Contrada was actually quite small in area. The four principle hospitals also played a vital part in restricting the movement of the poor.

An obvious example of the confines and boundaries created by the Serenissima is the first Jewish ghetto: its physical perimeter defined by a moat and heavy doors closed at curfew – truly an island within an island. Institutions for the physically or mentally infirm were likewise deliberately constructed on the small islands of San Servolo, San Clemente and Poveglia in the lagoon, which also hosted the two ‘Lazaretti’ quarantine hospitals and the community of Armenians. 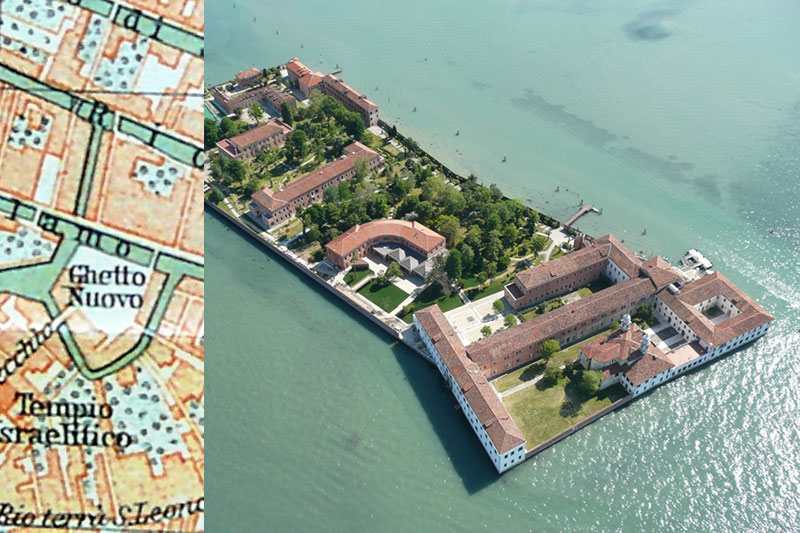 The foreign traders, (particularly Germans and Turks based around the Rialto) lived in fonteghi. These were warehouses on the ground floor with boarding houses above for registered travellers. The Slavs lived in Castello, the Greeks to the east of the Palazzo Ducale and from within Italy itself, people from Bergamo resided in S.Aponal and S.Sivestro and residents born in Friuli lived in S.Ternita’ and S.Giovanni Nuovo.

In her paper ‘The Control Of Space: Dealing with Diversity in Early Modern Venice’ Dr. Alexandra Bamji talks about the Venetian state having an ambiguous relationship with these visiting traders. Ethnic groups were encouraged to trade, but there was a long-standing suspicion of ‘the other’ as bringers of disease and challenging political or religious ideals. Dr. Bamji, citing Michel de Certeau, concludes her paper by saying “A boundary creates a space between insider and outsider, a frontier zone within which they can interact to mutual benefit. In early modern Venice, therefore, spatial divisions permitted the city’s inhabitants to deal with their diversity”.

In fact, learned visitors to the city throughout the ages often remarked or wrote about the freedom of movement and the multi-ethnicity of the city, rather than the confines restricting the diversity of people. It seems to me that a boundary needs to be a membrane, not a confine: that islands need ports to embark from, that ethnic and religious differences flourish and reach global potential when they interact positively with the other. However much states or authorities try to impose boundaries, people, by nature, are apt to transgress. In Venice, legislation about the place of the poor in the city was repeatedly reissued, indicating a lack of compliance amongst the city’s inhabitants.